“You’d seen the pattern before?”
“No, A different leaf pattern each time. But I can’t find the pattern to the patterns.”
“Age, sex, social status, mode of death, shape of the moon, position of the stars, birth order, role in the family.”
“No, they keep telling  me there is no pattern.”
“Perhaps there isn’t.”

Novelist Lily King brings us three dialoging anthropologists in the Papua New Guinea bush circa 1930s as they endeavor to both understand what they are observing and each other.

King’s fictional anthropologists, Nell Stone, Andrew Bankson, and Schuyler Fenwick  are stand-ins for the ethnographic trailblazers Margaret Mead, Gregory Bateson, and Reo Fortune. In life as in fiction these three are as interested in the people they come to know and “write up” as they are in finding their ways separat

ely and together in danger and in love.  The love triangle’s complexity, and uncertainty, is ench

anted further by the distant powerful presence of Helen Benjamin as Ruth Benedict. The three are treated to an early draft for field review of her masterwork theorizing of  “cultural relativism”:  Arc of Culture as Patterns of Culture. Mind, body, and soul are stirred for Nell as her attraction to the slightly older, slightly more favored, other women of Franz Boas as Father Franz Boas of Columbia University— the “cultural determinist”— shapes the flavor of her memories, and what she will come to write about “her people.”

“I asked her if she believed you could ever truly understand another culture. I told her the longer I stayed, the more asinine the attempt seemed, and that what I’d become more interested  in is how we believed we could be objective in any way at all, we who each came in with our personal definitions of kindness, strength, masculinity, femininity, God, civilization, right and wrong.”

As I read Euphoria and appreciated the overlapping genre innovations of King’s fiction, history, memoir, adventure, travel, geography, more..  jacket blurb offers so much on the “love story” that my bright teen daughter said “this is not a book for you!” “Well,” I said to her, “I think that the American pragmatist philosopher Richard Rorty lurks in the pre-war pacific jungles of Lily King’s mind! That’s exciting right?”

Ethnography may not pay off but is worth the effort. So is writing novels.  Rorty can speak for himself.  We need narratives that are “persuasive about” not “demonstrative of” truths about society.  “Re-descriptions” not “inferences” and “vocabularies” not “propositions” are these “units of persuasion.” Rorty famously concludes in “Contingency, Irony, Solidarity” that “novels and ethnographies not philosophical and religious treatises are the intellectual route to moral progress.”

“Tulu,” I asked, “what is the proper way for a Tongan (angafakatonga) to handle watermelon seeds?”
“I don’t know. How do you get rid of them in the states?”
“Sometimes you spit them right out on the ground or sometimes into your hand and then get rid of them somehow.”
“Same here.”

Hmmm..  Nell: “It’s all a jumble in my head still. I never know anything until I get back to my desk in New York.” 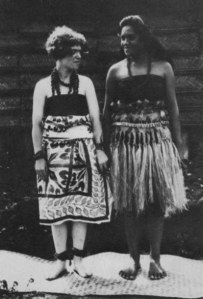 Nell wrote The Children of KiraKira  in these pages and Margaret gave us Coming of Age in Samoa (1928).  Written in New York, I bet,  and pitched by the passionate 27 year old Mead for the

favor of New Yorkers around Boas and New Yorkers around the William Morrow and Company publishing group, the book was an unparalleled hit.  We have been reminded over and over since the early 1980s by the strenuous rudely demonstrative interventions by pure truth telling anthropologist Derek Freemen and others, 50 years late on her trail: she got a lot wrong about sex and sexuality.  So did I. In Connecticut and in Vava’u. The horror.

“Could you ask while I’m there? Your informant might not tell you the truth, but at least I’ll have a look at his reaction.”

I can’t be sure if Richard Rorty had a place in King’s creation, in this work or at any other time. But for certain Derek Freeman inhabits the work most crucially in his critical absence. A structuring element, Levi-Strauss? No. Maybe. We work too hard, sometimes.

What did  Rorty mean by “moral progress” anyway?

“Live with plurality, diminish cruelty, make possible government by the consent of the governed, and permit as much domination-free communication as possible to take place.”

And euphoria. Thanks, Lily King!

All that is Solid Melts into Air

“To be modern is to find ourselves in an environment that promises us adventure, power, joy, growth, transformation of ourselves and the world—and, at the same time, that threatens to destroy everything we have, everything we know, everything we are.” Marshall Berman (1982)